Elvis Goes to The Movies 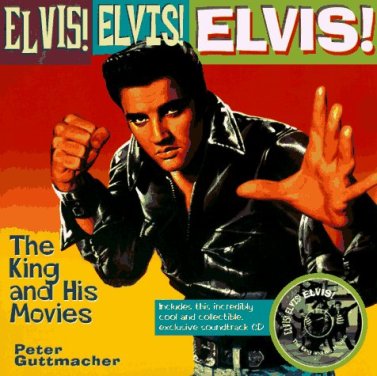 As a young girl, I absolutely lived for Elvis movies. I was literally mesmerized by Elvis, particularly in Technicolor. While we had limited TV channels (all of three, in Cajunland), it seemed that most Saturday nights, “The Late Show” featured an Elvis classic. At least in the movies, he was everything that a man should be: smart, sensitive, humorous AND he could sing like nobody’s business.

Colonel Parker figured that he could really cash in by putting Elvis on the silver screen. He inked a 7-year deal with Hal Wallis that would become a double-edged sword for Elvis. It gave him huge exposure and big bucks, but the nature of the films were so manufactured and cookie-cutter that they pigeon-holed Elvis and prohibited him from becoming a legitimate actor, even though he did have acting talent. For me, however, these cheesy movies were solid gold.

First up, as reviewed in the previous post was Love Me Tender, quickly followed up by Lovin’ You. But the movie that really put Elvis “on the map” was Jailhouse Rock. The song, and the movie, will always be synonymous with Elvis:

Oh, the innocence of the day…. amazing how nobody made the prison “connotations”.

Some of my favorites, directly followed. For obvious reasons, King Creole was top of the list and I give extra kudos to the directors for not attempting a fake Cajun or New Orleans accent.

So, effortlessly, Elvis delivers. His movie career, per se, was in full gear. While at the apex of his fledgling career, in 1958 Elvis was forced into a new role…U.S. Army Private. At the height of his popularity, Elvis was drafted and sent to Germany for a full tour of duty. Distraught, Elvis was sure that this was the end of his mercurial career. In Germany, Elvis would find many new diversions that would forever alter his fate….amphetamines and a young, army brat named Priscilla Beaullieu. However, in 1960, ELVIS WAS BACK…and kickin’ it.

Amazingly, from 1960 to 1969 to Elvis did two to three movies a year to deliver 31 major feature films. His first movie back from Army duty, ironically, was G.I. Blues. Always a sucker for a uniform, this was a particular favorite of mine.

Included in this movie is one of my absolute favorite Elvis tunes, Pocketful of Rainbows. While it’s not one of the most well-known Elvis hits, I think it epitomizes Elvis:

Then there was the masterpiece…Blue Hawaii. Elvis in all his tanned glory….Perhaps one of Elvis’ loveliest love songs came out of this movie.

As if he wasn’t sexy enough, he shows affinity for grandmothers…****SIGH****

And then there was the beautiful, Ku u-i-po :

Not only did Blue Hawaii provide romantic ballads but the fun of the islands, as well:

I Got Lucky, Kid Galahad

Am I Ready, Spinout

In 1969, shortly after his marriage to Priscilla, Elvis was determined that he was never going to be allowed to break out of this movie “formula”, so he began to work himself out of the movie business. In 1969, he tried a dramatic turn in Charro:

But fans weren’t ready for such a dramatic change. With no signature songs or dancing performances, Charro was simply out of character for Elvis. While likely his best acting performance, it is one of the lesser known Elvis movies.

Finally, Elvis concluded his movie career with A Change of Habit, in which he played a very good looking and hip missionary doctor opposite Mary Tyler Moore. His “swan song” of Let Us Pray Together seems appropriate, somehow.

Interestingly, in 1976 — on short year before his death — he was offered the lead character of John Norman Howard, opposite Barbra Streisand in A Star is Born. While Elvis felt that it was a role tailor made for him and one that could elevate him to a new level, Colonel Parker eventually talked him out of it. Perhaps the tide would have turned for Elvis had he taken that role. He certainly would have had to address his health and physical appearance and the confidence of a hit could have ensured that Elvis would have been around for a few more decades. Alas, it was not to be…

Posted by music maven on August 14, 2007 in Elvis, Music History

2 responses to “Elvis Goes to The Movies”