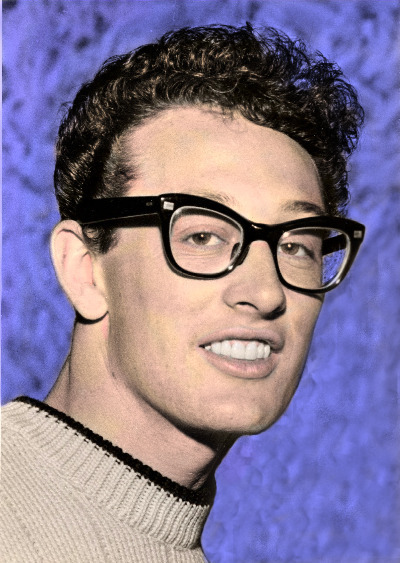 By now, you know the details of the crash fifty years ago that shocked the music world.  Graham Nash explains it best:

Graham Nash talks about “The Day the Music Died”

At 22, the lanky kid from Lubbock, TX  had been re-writing music rules.  At the tender age of 18, Holly had taken the sagging Rock & Roll scene by storm with stark rhythms and the strains of non-traditional instruments.  No hearthrob, Holly’s attraction was purely “the music”.

While Holly was quite a personality, it’s his music that has had the most lasting affect.  Many artists of the 60s and 70s, point to Buddy Holly as a major influence.  A young Robert Zimmerman’s life changed the night he watched Buddy Holly perform on the Winter Dance Party tour in Diluth, MN.  As Bob Dylan, he would also influence generations of music.

And, Buddy’s influence casts a long and enduring shadow into modern rock:

Holly also had a profound affect across the pond and was a strong catalyst in birthing the British Revolution.

Not Fade Away, The Rolling Stones

Paul McCartney is such a Holly-phile that after 1978’s The Buddy Holly Story revealed many inaccuracies, he produced a 1985 documentary, The Real Buddy Holly Story, to set the record straight.  McCartney also owns the publishing rights to Holly’s song catalogue.  Legend has it that The Beatles picked their name as a tribute to The Crickets, Holly’s band.

There are tribute concerts at the Surf Ballroom along with thousands of tributes and accolades across the world today to mark this Golden anniversary.  Holly’s influence is deep and wide.  When you consider his influence on Dylan, The Beatles, The Rolling Stones, CSNY, Springsteen, and countless others and their subsequent influence, Holly becomes sort of the metaphorical “source” of the river Rock.  His kun-NECK-shun to the lords and lasses now immortalized in the Rock & Roll Hall of Fame (of which he is a charter member) is unprecedented, surpassing even Elvis.

Don McLean’s American Pie, as well as Gary Busey’s otherworldly portrayal of Holly in 1978’s The Buddy Holly Story, have helped to keep the Holly legend alive.  Busey channeled Holly so brilliantly that he was nominated for a Best Actor Oscar.

However, perhaps the most fitting tribute to Buddy Holly and his short, yet profound career, are his own performances.

That’ll Be the Day

Raining in My Heart

Tags: not fade away, source of river Rock, the day the music died

8 responses to “The Day the Music Died: Finale – Buddy Holly”