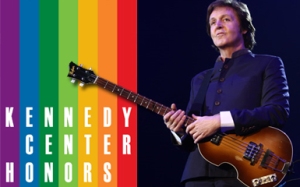 Side rant:  Can I just say that I am SO sick of Oprah?  When will we be freed from her excessive exposure and self-promotion?  I find her so insincere and disengenuous.  She sucks people in like she’s the “every woman” and “just like you” when she’s a kabillionaire who certainly doesn’t have to worry about college tuition or paying the mortgage.  Besides, anyone who needs a TV show, radio network, magazine and now a TV network, has got to be filling some kind of hole in self-agrandizement.  And people just continue to fawn all over her….blech!

For the Kennedy Honors, you’d swear that it was the Oprah Honors and “the others” were just there to bask in her glory.  She cannot help but to usurp everyone else’s attention….but I digress.

I’ve chronicled my Beatles love many times on this blog (see Beatles tags), but don’t know if I’ve ever delved into my Merle-adoration.  Merle Haggard is one of the legends of music — not just Country music — and is one of the good guys who has made things better for those around him.  And, his music is just, well…good.

and performances of Merle tunes by Kris Kristoffersen, Sherly Crow, Brad Paisley, Vince Gill and pal, Willie Nelson.  Note:  it’s a little long, but well worth it.  Also, notice Oprah trying to sing along.  Really?!?  You think she’s got a bunch of Merle CDs at home?

It’s no coincidence that Merle Haggard is such a friend of new artists and is so loved by his fellow performers since he decided to pursue music after hearing Johnny Cash at San Quentin when Cash was trying to bring a little joy to those less fortunate.  Just goes to show that paying it forward has ever-implacating rewards.  Personally, I’m torn between these two as my favorite Merle tunes:

I couldn’t help but think that Paul was thinking about John Lennon with this program being so close to the 30th anniversary of John’s death.  Must have been surreal….and lonely.