The Trust is Broken 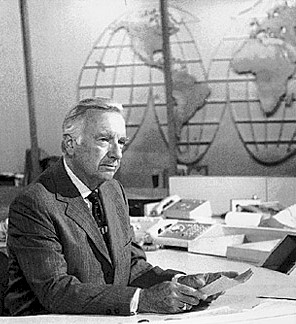 This is the face I saw every day, growing up.  Next to my father, Walter Cronkite, was the most prevalent male role model in my life for the first 14 or 15 years.  Every night at 5:30pm, Walt would deliver the news while my Mother was cooking dinner.  Most nights, my much older brother and sister were off somewhere doing their teenager thing, leaving my Dad and I to take in the world happenings of the day.  My father was not an extremely demanding parent, but he did encourage us to read the newspaper and to watch the evening news so that we understood the issues of our time.  It’s something that has proven to be invaluable in work and life, in general.

I’m not sure why, but our daily newspaper always came in the afternoon.  My father usually picked up the paper when he returned from work, precisely at 5:05 pm (his nursery business was around the corner).  Then, he went straight to the den, kicked off his shoes, put his feet up on the stool, and cracked open the newspaper.  I’d enter after finishing homework, turn on the enormous RCA console TV and flip the big manual knob to Channel 10, which was CBS in our town, to catch the sports and weather from the local news.  You see, I was the remote control to switch between the four channels we had access to.  I had just the right wrist action to fly between 10 and 3, around to 7 with a short stop at 15.  It took a special talent and an understanding of the optimum UHF antenna position, but after years of practice I had it down pat.

At promptly 5:30 pm, the reliable and familiar “Good Evening” from the most trusted man in America.  He then would dispense whatever vile and unconscienable acts mankind was committing on each other that day.  While I know that every generation has absorbed “news” that is astonishing and unbelievable, growing up in the late ’60s and ’70s was an endless diet of war, pestilence and death.  I’m talking assassinations, riots, protests, war fronts, burning bodies, cracked heads, hateful words, corruption, lies, murder, and general mayhem.  In short, it was NOT the best of times.

But, there were also fantastic, new “discoveries”….the space program, microwaves, trans-atlantic Concorde flights, The Beatles, cassette tapes, and unleaded gas.  Both good and bad, Walter Cronkite brought it all to us, with integrity, honesty and wit.

Unlike the biased and entertainment focused news from the likes of Katie, Brian, and assorted cable “anchors”, Cronkite’s news was gospel.  And, while there may have been some manipulation of the news, most journalists were searching for the “story”, to right wrongs, to change the world.  It was a serious time for serious news and Mr. Cronkite let us know the happenings of the day with appropriate seriousness.  While I don’t long for the crazy, volatile times of those days, I do long for the time when there was at least a perception of truth and trust in the news of today.  In Cronkite’s passing, perhaps today’s media will undertake a little introspection into just how shallow and superficial their news has become.  In the 24/7, sensational reality news of the new millenium, “news” people have lost the ideals of true journalism that Cronkite so aptly displayed in his tenure over some of America’s darkest days.  It is a credit to Cronkite’s integrity that no-one really knew, until well after his retirement, that he was a Democrat.  It was a testament to his objectivity and commitment to impartiality.  With all of the accolades sure to follow his passing, those delivering the news would be wise to follow more of his example.

When CBS forced Cronkite into retirement in 1981 to replace him with a younger, shinier Dan Rather, it subsequently sold its soul and eventually lost its hold on night time news.  Rather’s obvious left bias would be his undoing, leaving him woefully short of Cronkite’s legacy and class.

As a child of the ’70s, I tip my proverbial hat to Walter Cronkite on a career and life well lived.  Perhaps the most appropriate homage to the end of Uncle Walt’s personal broadcast are his own iconic words:

Musically, the one song that kept coming to my mind is John Mayer’s Waiting on the World to Change…

…when they own the information, oh, they can bend it all they want…..

Posted by music maven on July 19, 2009 in John Mayer, memorials, the seventies, TV